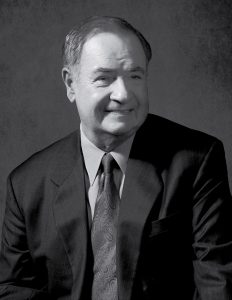 Ted Lyon was born and raised in Terrell, Texas. His undergraduate degree is in political science that he obtained from East Texas State University (now known as Texas A&M Commerce). Prior to law school, Ted married his high school sweetheart, Donna. While working as a police officer, he put himself through undergraduate school, and then went to Southern Methodist University School of Law. Over the past 44 years, Ted has represented clients in over 150 jury trials.

Ted has over 44 years’ experience representing clients in complex litigation, involving personal injury, wrongful death, products liability, and business disputes. He has received verdicts which were ranked in the top ten in the nation on three occasions. He has been interviewed and featured by national and local media outlets, including Good Morning America, 60 Minutes II, NBC Dateline, Texas Lawyer, Dallas Observer, The National Law Journal, D Magazine, and Texas Monthly. Ted handles complex litigation. Ted has repeatedly (2003 through 2020) been named to the Super Lawyer List by Thomson Reuters, and was named one of the top 100 Lawyers in America by American Trial Lawyers Association consecutively since 2007.