We have reached out to you about the electric power natural gas crisis that happened in February of 2021. Texas Health & Human Services confirmed on December 31, 2021, at least 246 Texans were killed by the storm related to power losses. [ l ] Forbes estimated that the death toll was over 700[2]. Most of these people died of hypothermia. This disaster was related to a natural gas supply shortage in the months preceding the freeze. We have evidence that there were several large gas companies that caused this supply shortage and we've included an aggregate reduction number chart (below) to prove the shortage was by design.

We believe there was a different reason for what the culprits did. Right at the time when the electric power producers needed gas the most, the gas supply shortage was at a historical low, in part, because of the actions taken by these gas companies to reduce natural gas production. The rare storm outcome was catastrophic to most Texans.

We are currently investigating this situation [3]. We have looked at voluminous production data from the Texas Railroad Commission dating back to 2017. What we have found is that all across Texas, gas production levels were stable and steadily increasing, from 2017 through the first part of 2020. The numbers show that in the spring of 2020, starting in March and April of 2020, major gas gathering companies began to cut off producers like you, refusing to take or pay, claiming high line pressures, oxygen in the gas, pipeline issues or a "force majeure" communication was the reason. The gathering companies allegedly failed to pay producers the percent of sale due under the gas purchase contracts when gas was selling at or above $400/MCF during the winter storm. If you were not compensated at or above the $400/MCF during the February winter storm, we would like to talk with you. For gas producers, we can also provide a free analysis of your specific gas sales compared to other production in your area within a 2 1/2 mile radius of your wells.

We request you or anyone within your company send us copies of any and all communication you or your company received in regard to why your gas was shut in or refused. Obtaining this information will help expose the truth about what happened in February 2021.

Our investigators will be reaching out to you soon and your assistance will be valued during this inquiry. They will also be able to assist you regarding your free gas sales analysis. You may reach us at 1-866-503-4864 or submit your information confidentially and immediately to the right.

For whistleblowers or those wishing to remain confidential, click here to upload relevant documents and information.

Note:In the spring of 2020,Texas saw its first reduction in production across the state. 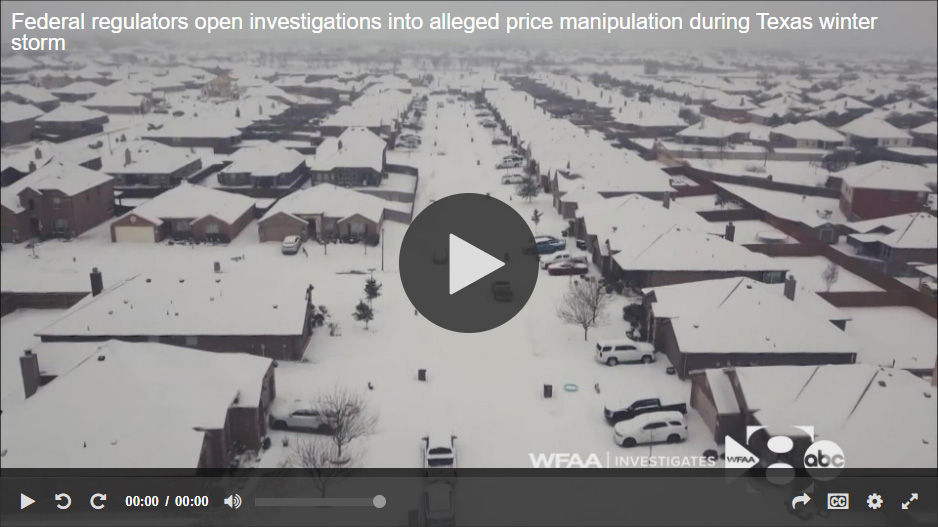